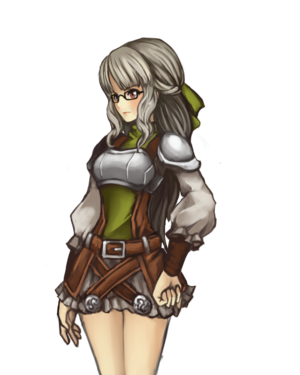 Antoinette, of Bywrnish descent, is the trusted squire to Legatus Laendur.

After years of living in poverty as a Bywrnish refugee, Antoinette was determined to make a better life for herself. With very few places that she could go, she quickly signed up to join the Fenumian army. While smaller in stature and noticeably weaker than other soldiers in her company, everyone could see her determination was a force to be reckoned with. It did not take long for Legatus Laendur to notice and inquire about her. Once he found out that she, too, was of Bywrnish descent, he quickly transferred her to be his personal squire.

Antoinette never forgot the harsh treatment she would receive as a Bywrn woman. The sudden change to be the personal squire of the "Legendary Hero" who was also Bywrn seemed like a miracle to Antoinette. She gladly served under Laendur and proved her loyalty to him throughout his many military campaigns.