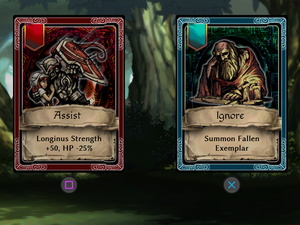 Between battles, you make choices that change the fate of Fenumia. Each question has three orders you can give and below each order is a tribute you will receive if you pick that order. For example, choosing "Assist" would increase Longinus' strength by 50%, but reduce her maximum HP by 25%. Buffs from tributes last until the end of a level. All Exemplars restore HP after you make a decision and the amount restored depends on your empire's morale. Diplomacy Decisions affect how Exemplars evolve into Order or Chaos forms and Story Branches.

The Prime Legion is comprised of the best soldiers from all the other legions and serves as the primary bodyguard for the sitting Emperor. In practice, however, they often decide who the Emperor will be, and can remove Emperors who don't satisfy them.

These nobles advise the Emperor on politics, but wield little explicit political power. They do, however, wield a great deal of economic and social power. Members are referred to as "Princes", but this reflects a completely ceremonial concept of family and inheritance. Princes claim power because they are the "children" of the Emperor, and thereby entitled to certain usage of his/her majesty's lands.

The members of the March Council Margraves engage in the research and practice of Soulmancy, which "borders" on the edge of human knowledge and perhaps good taste as well. The March Council is not held in the highest esteem by the general population, who regard their work as somewhat unnatural, but they also provide a great deal of powerful and important magic to the Empire.