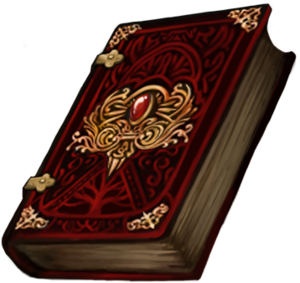 A mysterious book of unknown origin. Filled with magic, the Grimoire has the ability to summon Exemplars.

No one really knows how long the Grimoire has existed in Fenumia. However, it is known that this book has been passed down from generation to generation in Fenumia's royal family. It's existence has been kept a secret for centuries as it is said to hold secrets and power that cannot be found anywhere else.

The Grimoire also has the ability to talk and is said to contain extensive knowledge in all matter of things. Due to this reason, each Emperor of Fenumia has kept the book as an adviser. While some Emperors have been able to use this knowledge to improve technology or economy within the Empire, some other Emperors have used this knowledge to win wars and expand Empire's influence.