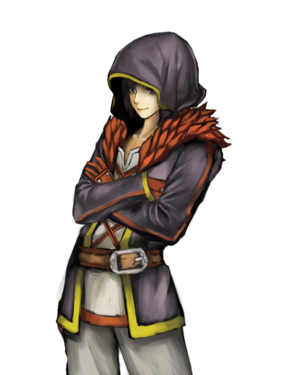 Legatus Laendur is a legendary hero and leader of the Fenumian army. Working with Princess Cecille, they both have conquered many lands neighboring the country.

Laendur, of Bywrnish descent, has proven to be an adept and loyal soldier to the Fenumian empire from a young age. Through many successful military campaigns, Laendur has proven to be a great warrior and leader. Many throughout the army ranks have given him the moniker of "Legendary Hero" as he had never lost a battle that he led. Laendur was supported through his rise in the military by his older brother Bryn and his squire Antoinette.

After hearing of Laendur's moniker, the Emperor of Fenumia quickly placed him under Princess Cecille's leadership and gave him the rank of Legatus. This new title gave him command over the Fenumian army and made him second only to the Princess.

Laendur, loyal to Fenumia, is keen on bringing the Bywrn name back to glory. Bryn and Antoinette share in Laendur's ultimate goal.